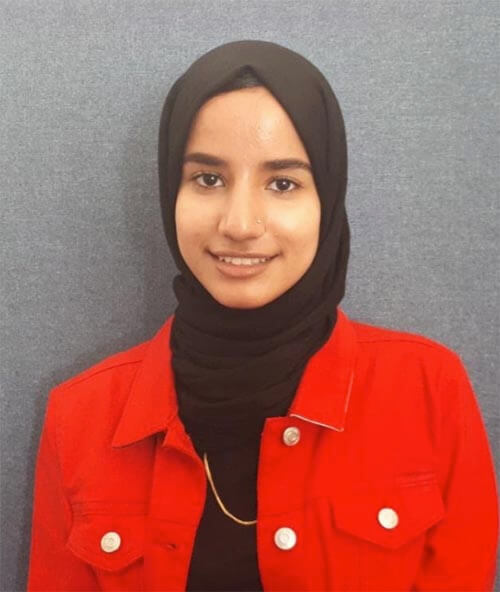 Aya’s story begins in 2001, in Canada where she was born. When she was 2 years old, her family left Canada to go to Yemen, their ancestral homeland. Yemen was where their family was, their friends, their culture and well, their home. In 2015 amidst the Arab Spring enveloping the Middle East including Yemen, Aya’s family decided to leave Yemen. It simply was not safe anymore. Violence could erupt at any moment exacerbating Yemen’s revolution.

In 2015, Aya arrived with her family in Canada. This is where we will continue her story.

As you can tell, Aya wears the hijab.  The word “hijab” comes from the Arabic root word meaning to cover, or to screen. A hijab is a veil that many Muslim women around the world wear as an act of modesty, and a religious practice. The type or colour of hijab a woman may wear is based on her personal preference and usually will change on a daily basis, colour coordinating with her outfit of the day.

However, this hijab has also attracted unwanted attention and racist remarks.

There is no society in the world that is free of racism and well, by default, the Niagara Region isn’t either. As we talked, she described the stories of random people on the street walking by and telling her to “take that thing off” or “go back to where you came from”. Or the time she boarded a local bus only for a mother to bring in her children closer to her as if to “protect them” from an upcoming threat. Or the time she was in a popular department store shopping while speaking Arabic with her mother only to be told by another shopper to “stop speaking that language and speak English”.

At this point, she says “I just ignore it now.”

But this begs the question, what can we do as a community to deal with this problem?

Aya is home now in Canada. She loves it here. Of course she misses her schoolmates, her extended family, her food but she knows Canada is a land of opportunity.

With this opportunity, she has dreams for a better future for herself and her family.

She was accepted to every university she applied for but chose to stay local and study at Brock University in the department of Bio-Medical Sciences.

After graduating, she wants to pursue medical school and eventually become a pediatrician.

Canada is better off with youth like Aya in it and we wish her nothing but success for the future!

As for her message to other newcomer youth, she says “in the beginning it’s hard to get adjusted to a new system and language but keep practicing. Don’t be shy to speak English, even if you make mistakes with grammar, you will eventually improve and grow.”

And that’s exactly what she did.