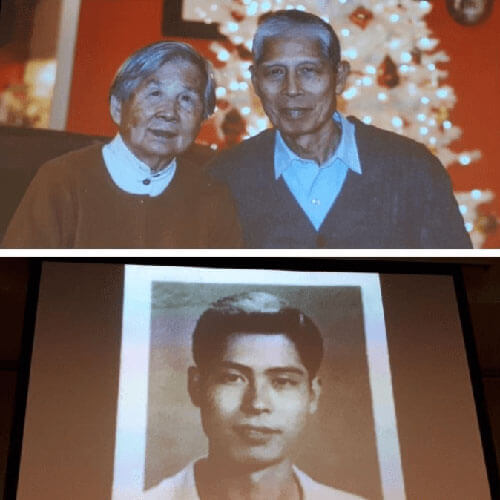 There is a famous Chinese proverb that says "A journey of a thousand miles begins with a single step" ( 千里之行，始於足下 ).

Haohui Chen along with his wife took this step immigrating to Canada from China in 2013 at the age of 80. Just imagine that for a second. Leaving all what you’ve known for all your life and establishing roots in a land thousands of miles away. But it is because of this single step, we had the pleasure of meeting this man. Haohui Chen was affectionately nicknamed “Jack” upon his arrival in Canada by a family member. His wife was nicknamed “Jill”. Jack & Jill is how they introduced themselves. They were always together. They had been married for 62 years. They were in love.

Sitting with your elders in conversation is like uncovering the secrets of this world.

Jack would always come early to the Folk Arts to participate in group activities on a weekly basis.

On one occasion, I asked him: "Jack, what is your secret to a happy and long-lasting marriage?"

He laughed but with all seriousness, he answered: "Don't sleep at night angry, solve your issues before you sleep".

Jack in his younger days was an engineer. He turned down being promoted on multiple occasions because he said he wanted to be more "family oriented". He had a love of photography, practicing Tai chi at Montebello Park, and singing. In a surprise to his family on Christmas, Jack and his wife sang in harmony "silent night" all in English which they had been practicing.

He had a curious mind that never stopped learning, even being tutored in English at the Folk Arts up until his last days.

And fittingly so, his last act on this Earth was an act of kindness to his wife, passing away as he took her to the hospital for a checkup.

As we reflect on Jack’s story, let us all derive lessons and be mindful of our legacy in this world. Through kindness, the world will truly be a better place.

On behalf of all of us at the Folk Arts, our heartfelt condolences to the Chen family.