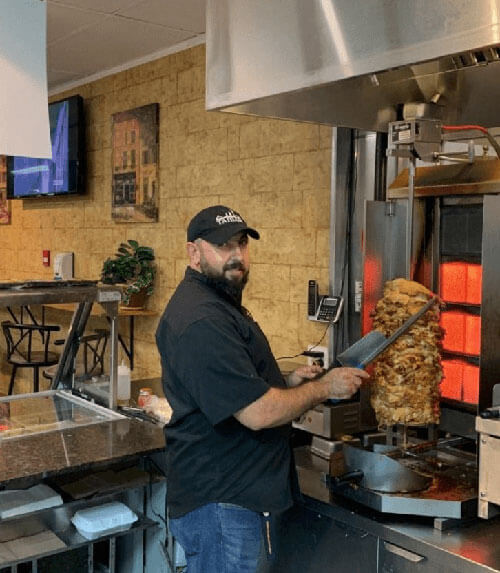 Moutasem arrived in Canada as a Syrian Refugee in July of 2015.

In Syria, his family ran a family business, a factory, which produced hygiene products and sold them domestically but also outside Syria.

When Moutasem first arrived, his English level was at Level 2. He has since progressed to Level 5.

His first stop upon arriving in Canada was the Niagara Folk Arts Multicultural Centre. He remembers that within one week, the Job Search department was able to find him not one but two full time jobs.

For 2 years, Moutasem worked to provide for his wife and 4 children. He juggled two full time jobs working 80 hours a week. After he finished his first job at a laundromat in St. Catharines, he would drive to Niagara Falls to work in a restaurant as a chef, eventually becoming the kitchen manager.

Working long days starting at 7:30am until 11:30pm, he decided he wanted to open his own business. He was connected with a mentor who helped him secure his business license and eventually opened "Taibah", a restaurant on St. Paul St. in St. Catharines. "Taibah" is an arabic word meaning "delicious".

At Taibah, your taste buds will experience Mediterranean / Middle Eastern cuisine ranging from shawarama to hummus to tabbouli to falafel.

When asked how his customers react when they find out he was once a Syrian refugee, he said they all express positivity, "they are happy for me, they say we are sorry about what happened in Syria but they motivate me to keep going". He hasn't received any negative feedback.

He has since employed 5 workers at his restaurant.

His message to newcomers is "as your searching for jobs, don't be afraid to ask for help. The Multicultural Centre is a great resource in the community. In the end, your hard-work will produce results."

As for the future, Moutasem would like to open a bigger family restaurant with a large area for dining.

But for now, Moutasem has exciting news. He held his GRAND OPENING for his second location at the food court of the Fairview Mall.

Try it out, you surely will not regret it!